Lychnos: Notebooks of the Fundación General CSIC is a quarterly scientific journal addressing non-specialist audiences which aims to become a public forum for discussion and debate, and in which leading scientists and players in the R&D system can express their views to society as a whole.

Lychnos looks at significant areas of R&D in a way that makes them accessible to a variety of audiences. Its flexible and dynamic structure is backed up with the rigorous and accurate content today’s non-specialist but demanding and well educated audiences call for. The journal’s name, which comes from a Greek word for a source of light, alludes to the shape of the Foundation’s logo, and reflects its goal of shedding light on scientific issues that directly affect people and their environment.

Through Lychnos the FGCSIC aims to contribute to raising awareness in the productive sector and society as a whole of the importance of scientific research, and to project an image establishing the institution as a genuine platform on which research, business and society can meet, and in which all the system’s stakeholders can feel themselves to be represented. 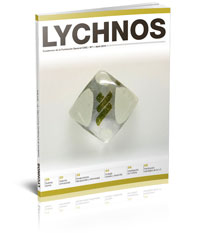 The journal will also be published in English and will be available to the FGCISC website’s registered users registrados en nuestra web.