The president of the CSIC and the Fundación General CSIC, Rafael Rodrigo, together with the Foundation’s director, Javier Rey, and the legal advisor for the Santander Universities Global Division, Faustino Bau, today, 16 March 2010, presented the first call for Proyectos Cero proposals, offering funding for projects relating to Threatened species.

With a budgetary allocation of a million euros, the call for proposals is being sponsored by Banco Santander, the Agencia Estatal CSIC and the Fundación General CSIC. 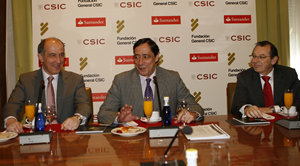 Its aim is to promote high quality, multidisciplinary, innovative research into endangered or critically endangered animal and plant species.

The period for submission began yesterday, 15 March, and the call is open to groups of researchers working at one or a number of public R&D institutions. The deadline for submissions is 18 April and the final decision will be published on the Foundation’s web site no later than 31 July. In the words of Rafael Rodrigo, president of the Fundación General CSIC, the choice of the Threatened Species strategic line for the first call was prompted by the importance of the issue and fact that 2010 is the International Year of Biodiversity. He also highlighted the competitive basis of the Cero Project call for proposals, and that it is open to a wide variety of research groups. He stressed that it does not aim to substitute for the National Research Plan or other regional plans, but to act as a complement to them. 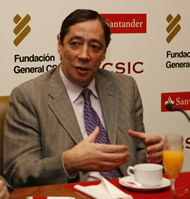 Faustino Bau, legal advisor for the Santander Universities Global Division, highlighted the bank’s interest in the Cero Projects and pointed to how Banco Santander had made supporting research a key feature of its corporate social responsibility.

For his part, Javier Rey, director of the Fundación General CSIC, emphasised that this call is intended to be highly selective and will provide funding for up to a maximum of five projects. He also pointed out that the evaluation process would be run in conjunction with the National Evaluation and Foresight Agency (ANEP) and would involve both Spanish and international evaluators.

Full information about the call for proposals is available at www.fgcsic.es/convocatorias/especies_amenazadas