Fundación General CSIC, Spanish National Research Council (CSIC) and Obra Social “la Caixa” held a one day seminar on Ageing to present the various activities being run by the Foundation within its strategic line on the topic. These include, in particular, the launch of a call of Proyectos Cero proposals for projects addressing ageing-related topics, which is being backed by Obra Social “la Caixa” with an endowment of a million euros. During the seminar an agreement was signed in order to implement this joint action by Fundación General CSIC and Obra Social “la Caixa”. Leading experts on ageing also took part, each looking at the phenomenon of ageing in Spain from the perspective of their various fields of specialisation. 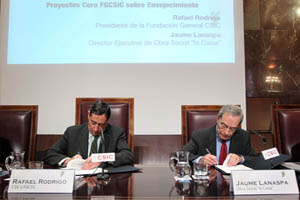 Moment during the seminar on Ageing

The seminar was divided into three blocks. The first block, covering the Fundación General CSIC’s strategic line, included the presentation of a report on ageing in Spain written by the FGCSIC’s Analysis Unit, and a monographic edition of the Foundation’s popular science journal Lychnos on the topic of ageing. The first call for Proyectos Cero proposals for projects on ageing was also announced, backed by Obra Social “la Caixa” with a million euros available for researchers at public R&D organisations. Following the presentation of the call by the Director of Fundación “la Caixa” Jaume Lanaspa, the President of the CSIC and of the Fundación General CSIC, Rafael Rodrigo, and the Director of the Fundación General CSIC, Javier Rey, an agreement was signed by FGCSIC and Obra Social to implement the action. Through this call for proposals, which forms part of the FGCSIC’s strategic line on Ageing, Obra Social “la Caixa” is lending it support to studies looking at various psychosocial issues affecting old people, and technological research (telemedicine, prostheses, new materials, home automation and robotics) and its effects, focusing on improving quality of life for this group. The call for proposals aims to promote research addressing the problem from various different disciplines. This means addressing biomechanical, social and psychological issues, as well as the biomedical dimension.

The Proyectos Cero are the Fundación General CSIC’s flagship initiative, aiming to encourage, stimulate and provide mechanisms for the private funding of public research. The Proyectos Cero aim to promote innovative transdisciplinary approaches to solving high impact problems and issues of a scientific, technical nature or high social or economic profile.

The 2011 edition of the call for Proyectos Cero on Ageing, which is currently underway, will focus exclusively on two areas of activity: psychosocial research (those studies with a central focus on the individual and the individual’s interaction with his or her environment) and those of a technological nature (grouping research oriented to alleviating the effects of ageing, both on individuals and their immediate or more remote environment). 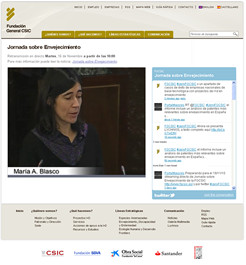 The seminar was relayed live on the FGCSIC’s website

The seminar’s second block gave the floor to researchers in the field, led by a lecture by Maria Blasco, Deputy Director of the Centro Nacional de investigaciones Oncológicas (CNIO). The third and final block comprised a round table examining various areas of research focusing on ageing from the biomedical, psychosocial and technological viewpoints. Herminia Peraita (UNED), José Miguel Azcoitia (Tecnalia), Isabel Varela-Nieto (CSIC) and Antonio Martínez Maroto (IMSERSO) took part in the discussion, which was moderated by the journalist Javier Grégori (Cadena Ser).

The fall in the birth rate, in conjunction with declining mortality at more advanced ages, is creating a new challenge for our societies, such as ensuring that greater longevity does not result in an increase in the number of infirm and dependent persons, rather that old age is associated with health and active living. In line with the main national and international research policies, Fundación General CSIC is promoting activities in the context of its strategic line on Ageing, disability and illness.