The president of the Spanish National Research Council (CSIC) and the Fundación General CSIC Rafael Rodrigo, and

to meet the Foundations overheads and, in particular, to help fund the Cero Projects. 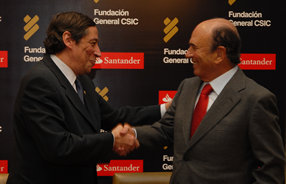 Santander Universities Global Division and represents solid backing for the Cero Projects programme, which, through

a series of annual public calls for proposals, will fund research projects "that approach their subject in a way that includes a significant innovative component and high degree of risk."

The Cero Projects are to promote

Human Ecology and Development; and

Frontiers. The first call will be launched and projects chosen during the first half of 2010.

In the words of the Foundation’s president, Rafael Rodrigo:

solutions to the needs and problems of industry and humanity in general, both individually and collectively."

He went on to explain that the Foundation intends to become a meeting point for business, society and research, and to

The signing of the agreement with Banco Santander undoubtedly represents significant backing to the achievement of the Foundation’s goals.