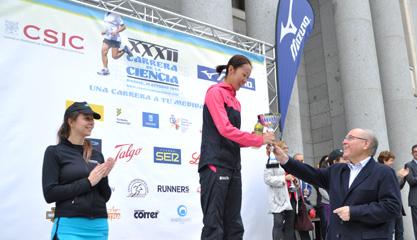 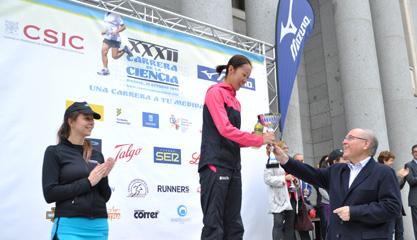 The XXXII Carrera Internacional de la Ciencia (32nd International Science Run) was won by Mohammed Blal from Morocco and Rehima Jewar from Ethiopea. The mini-marathon was organised by the CSIC and the Fundación General CSIC was among its sponsors. Eight thousand competitors took part in the contest, held on Sunday 21 October in Madrid, running the officially approved 10 kilometre course starting and ending at the central campus of the Spanish National Research Council (CSIC).

With a time of 30:36 Mohammed Blal repeated his 2011 victory, making him the first athlete to win two editions of the Carrera de la Ciencia. He shared the podium with Spaniard David Solís, member of Club Bikila, and Swede Fredrik Uhrbom.

The Carrera de la Ciencia is a classic fixture on the sporting calendar. Over the course of its history, leading figures in athletics have taken part, such as Martín Fiz, Julio Rey, Antonio Serrano, Ana Fidelia Quirot and Portuguese athlete Fernanda Ribeiro, Olympic and world champion in 10,000 metres.