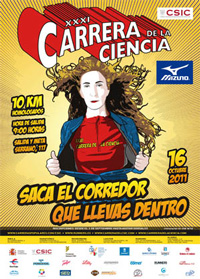 The Fundación General CSIC is taking part in the XXXI Carrera Internacional de la Ciencia [31st International Science Mini-Marathon], which will be held on 16 October. This is one of Madrid’s best-known mini-marathons, covering an officially approved 10 km course starting and finishing at the central campus of the Spanish National Research Council (Consejo Superior de Investigaciones Científicas), the event’s organiser.

In 2010 the race had over 7,200 participants and was won by two Kenyan athletes: Hillary Kipkogei Yego, took the gold medal in the men’s category, and Winnie Jepkemoi, in the women’s, with times of 29:32 and 33:12, respectively.

The deadline for registration is 10 October and it costs €13 to enter.